If you love ’80s music and cheesy music videos, then you’ve found gold! Here are ten songs that you’ve probably never heard before that will expand your ’80s playlist and keep the crowd dancing, while giving Men Without Hats a well-deserved break. They mostly come from Europe, where pop music and fashion thrived in the ’80s. They contain all the signature sounds you’d expect, and the videos take the clothes, dance moves, and hair styles to a whole new level! It’s hard to believe that some of these songs weren’t international hits, but then, if they had been, we wouldn’t have the pleasure of discovering them now! 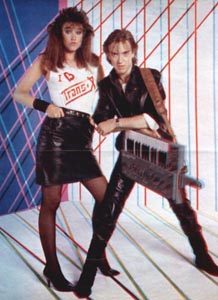 This is the song that started me down the path of ’80s Euro pop and Italo Disco. The video made a little splash on social media, mainly for its retro kitsch factor, but I personally really liked the song. The hard-driving bass, the melodic riffs, the train sounds, the dramatic vibe, and the subtle backing vocals overshadowed the fact that it looks like they’re performing in a basement with weightlifting equipment. In most English-speaking countries, Italo Disco is a term used to describe a strand of synth-heavy European pop music from the ’80s, and although the genre did originate in Italy, a lot of the music came from elsewhere. But Wish Key were real deal Italians, and “Orient Express” is a great place to start this musical journey!

Silent Circle – “Touch in the Night”

A widow’s peak that puts Eddie Munster to shame is just the tip of the iceberg that is vocalist Jo Jo Tyson’s hair, which is only the tip of the iceberg in terms of the visual treats this video has to offer. Music-wise, a prominent bass line and electronic percussion work alongside an almost Caribbean-sounding synth in this danceable love song from West Germany’s Silent Circle.

Rockets hailed from France and were the kings of a genre called space disco that had its heyday in the late ’70s. Here they are bridging the gap between the two decades, looking more than ready to embrace the future. Outrageous doesn’t begin to describe their look or their cosmic analog sound. Gotta love a band with a theme!

Enter the keytar, enter the mullet, and top it all off with a fluorescent cut off t-shirt and you have Shanghai, who were actually from Sweden. Featuring an androgynous look and some really tight vocal harmonies (keep in mind this is well before any auto-tuning or pitch correction was available), this group is perhaps a foreshadowing of things to come for Sweden, which is now the pop music songwriting capital of the world. Side note – if anyone has any idea what kind of guitar that is, please let me know!

All right, I’ll admit it. This song by Dutch diva Vanessa is my favorite song on the list. The video offers a gazillion watts of eye candy coming from all directions (Vanessa herself once posed for Penthouse), but the truth is, I’ve listened to the song a lot more than I’ve watched the video. I love the basic progression, the electro percussion, the Sweet meets Abba vocal harmonies, the sweeping strings, and the overall uplifting feel of the song. (Go here to get a cheap custom song.) For me, it went from being the cheeseball Youtube find of the year, to a guilty pleasure of sorts, and has since graduated to being my go-to “get cheered up or wake up in the morning” song. Put this on at a party and see if it doesn’t get a reaction!

Here’s the only instrumental on the list. The origins of the group Stop are hard to suss out. Wake Up was recorded in Los Angeles but seems to have had the most success in Spanish-speaking countries. As someone who was a voracious fan of music in the ’80s, I can tell you that it never saw the light of day in the U.S. At any rate, this song is sure to please fans of Gershon Kingsley, Herbie Hancock, or anyone interested in the origins of EDM. The video is AMAZING! Stop motion, claymation and flying records – need I say more? It’s a true gem. Even the most cynical hipster would have to raise an eyebrow over their glasses for this one.

More Käse from Germany! A keytar produces a dramatic and catchy groove on top of which vocalist Lian Ross can do her thang, which consists of rocking an intense mullet in an outfit that makes her look like a garish triangle. She’s a good singer though, and as recently as 2009, was making records that still topped the charts in various parts of Europe. But 1985 found her in mismatched gloves dancing in the midst of a modern art installation with a proto-goth bassist and an ubernerd keyboardist. Welcome to her world of Fantasy!

Let’s momentarily leave the old world as we feast our eyes on Canada’s Trans-X. This video transcends kitsch and lands in the realm of pure surrealism. Backing vocalist Laurie Ann Gill’s minimalist dance moves in front of a bank of televisions in combination with her INSANE hair are PURE GOLD! The song itself may or may not be a nod to the Buggles’ similarly themed tune, but it’s definitely a hypnotic minor key ostinato sprinkled with all kinds of tasty electronic flourishes and even robot voices! The lyrics are kind of cool, too.

Kazino – “Around My Dream”

Now for Belgium’s only entry into the fray. “Around My Dream” was originally performed by Italian disco singer Silver Pozzoli, and although musically Kazino’s version differs only slightly, the video for the song is much sillier than the original. In fact, it’s one of the only videos that I came across in which the band seems to have a sense of humor about what they’re doing. We get to see artsy shots of mannequins, a tongue-in-cheek Saturday Night Fever dance, and wow! That bass player looks great in drag!

This song is markedly more complex than the others gathered in this post. With jazz chords and lyrics such as “The first cut won’t hurt at all, The second only makes you wonder,” this song, and Propaganda’s music in general, is less focused on the dance floor and more concerned with deeper musical exploration. The video follows a nice film noir narrative interspersed with the band performing in a Maxfield Parrish-influenced set. “Duel” charted in a handful of countries in Europe and it’s almost baffling that it didn’t find its way to MTV and the charts here in the U.S.

During the process of reviewing songs for this post, I’d often find myself thinking, “Wow, this is more ’80s than the actual ’80s were.” If you were raised in rural America like I was, then MTV was your window into the pop world, but the songs and videos collected here took things a step farther than MTV was willing to go. The hair was bigger, the songs more repetitive, the outfits more outlandish, and then there’s the dancing. Some find it funny, some would say unprofessional, I say it’s just really human, and I’m kind of drawn to it. I’m guessing the resources weren’t there for choreographers or to hire professionals, so the performers (who were probably singers first and foremost) just put on their weird clothes and danced! If you think it looks silly, try filming yourself dancing! There was no shortage of great material for this list and I tried to pick songs that I thought were good and had an accompanying video that was somehow noteworthy. I also tried to avoid having too many videos from any particular country (I could easily have done ten from Germany alone). I hope that you enjoyed these aural and visual delights from a bygone era! Please feel free to leave a comment!

Custom Serenade is a custom songwriting service. We write and record original songs as gifts or for any reason at all. Please poke around our website and keep us in mind for any occasion that might benefit from a custom song! You could even reference one of these songs or genres in your order, as in, “make it sound like Italo Disco!”

Here are some additional Italo Disco songs that you might enjoy.