In addition to being the principal songwriter for Custom Serenade, I am also an avid music fan. Not only do I like to listen to music, I like to think about it, talk about it, and write about it. In the Songs I Love series of blog posts, I will present some of my favorite songs, and tell you why I love them.

Back in the day, I was a mixtape maniac. I especially liked making tapes for other people, and one of the best additions to any mix would be a great song that the recipient hadn’t heard before; something that would send them scrambling for the hand-scrawled track list to find out who they were listening to. I had a lot of aces up my sleeve in that department, but the king (or queen in this case) had to be Cryin’ Inside by The Heart Beats, a little known all girl garage band from Lubbock, Texas.

I found out about The Heart Beats from a compilation album called Girls in the Garage Volume 3, a collection of 60s bands comprised solely of women. It’s a fantastic record without a bum track on it, but Cryin’ Inside stood out from the very first spin. One listen to the song and you can understand why. The minor key vocal melody delivered in a whispered voice, paired with the swirling organ sounds are absolute heaven for the ears. Then there’s the rock steady beat accented by crisp rhythm guitar and a very lively tambourine. This song puts the groove in groovy. The lyrics are pure teen-drama bubblegum bliss, delivered with an urgency and innocence that only a teenager could muster (The Heart Beats were aged 12-15 when the record came out.)
I can see daylight in your kiss,
I can see sunshine through the mist,
I don’t have your love,
but my tears pile high,
I’m smiling, while I’m crying inside.

When I first heard Cryin’ Inside, all I knew about the song and the band came from a scant paragraph on the back of the album, and a picture of the Heart Beats that made me think the Brady Sisters had formed a band with Gidget. 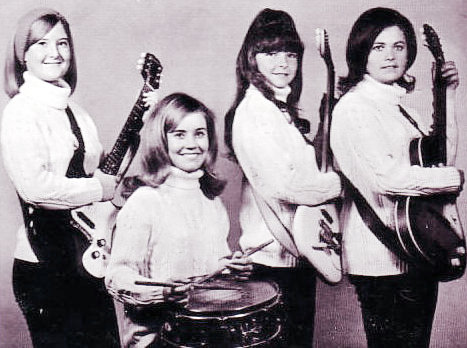 Now, thanks to the internet, there’s plenty of information about the band via fan pages, wikipedia, and even a radio interview. The song itself was co-written by Ronnie Weiss of Mouse and the Traps (a frequent flyer on garage rock compilations). The band’s claim to fame was winning a nationally televised battle of the bands called Happening ’68.

Cryin’ Inside  is a fantastic mixtape song not only because it is a great song, but also because of its versatility. It fits the wholesome image that the Heart Beats projected, but is also perfectly at home in the midst of a garage rock compilation that features bare-breasted women on the cover. It will sound great following anything from Judas Priest to Abba. It is an all around winner, and I hope that you enjoy listening to it.